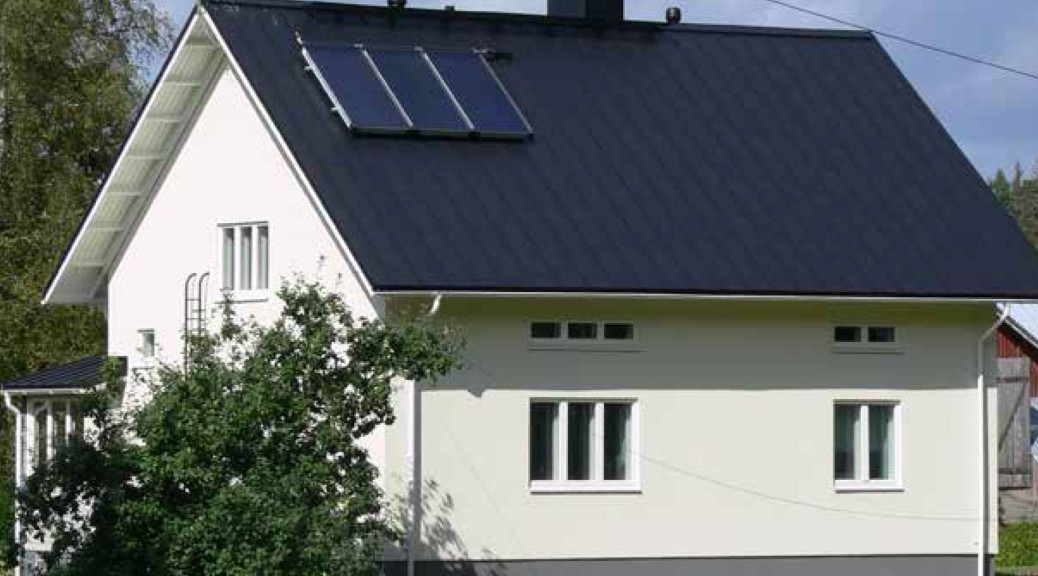 Energy renovation in the 65-year old home of the Salopelto family started in 2013 and was completed in spring 2014. This is a significant pilot project, in which a wood-framed house is being renovated into an energy class A building. The house represents the traditional Finnish ‘veteran house’, developed during the reconstruction period after World War 2 as a self-build house for soldiers returning from the Front. Its ventilation is provided by the Enervent Pandion MD-CHG, and the heat distribution system is ventilation heating.

In Finland, there are about a million old detached houses, and experts think that at least those built pre-1980 should be renovated to improve their energy efficiency.

This 1.5-story veteran house, built in 1948, is located in Luumäki, near the city of Lappeenranta in south-east Finland, and it was almost in its original condition before the energy renovation started in 2013. The changes made over the years were minor – even the floorboards are original. Only some of the windows were replaced, and supplemental frames were added on to others. The wood framed and wood-clad house had a metal roof. Sawdust was used as the insulation material in the building envelope.

Like in all veteran houses, the first floor contains the kitchen, living room and one other room. A cold porch at the entrance offers a pleasant extra space in summer. Upstairs features two bedrooms, a sauna and bathroom facilities. The residents have been very pleased with the highly functional floor plan and timeless architecture of their home.

This house is the birthplace of Seppo Salopelto, a building engineer and vocational school teacher. He has lived in the house for almost his entire life and, with his wife, raised their three children who have since moved away.

In addition to energy savings, Mr. and Mrs. Salopelto wanted to carry out a thorough renovation to improve the level of comfort in the old house. Being a professional in the construction industry, Salopelto acts as the project supervisor and uses it as a base material for his Master’s thesis.

As energy efficient as a new building

The Salopeltos’ home was selected as a pilot project for the renZero project. The project is funded by the Finnish Funding Agency for Technology and Innovation (Tekes) and it aims to develop a cost effective energy renovation concept for single-family houses. Launched in 2011, the project seeks a functional solution to improve the energy efficiency of Finnish and Swedish single-family houses built between the 1940s and the 1970s.

The target of the pilot project was set high: to convert a leaky old building to an energy class A building whose air leakage rate would be even lower than what is required for a new building. It is likely to be close to the energy performance of nearly zero-energy buildings. The fact that the residents of the house would continue to live in the house throughout the renovation project made the project even more challenging.’

The exterior walls of the building were completely renovated. The roofing, windows and doors were replaced, and the building envelope was clad with ventilated renovation elements developed specifically for this purpose by Paroc.

It is obvious that an airtight and well-insulated building envelope is not sufficient to make a house a nearly zero-energy building. In addition to reducing the energy consumption, the share of renewable energy must be increased. In the Salopeltos’ house this was implemented by utilizing ground-source heat and solar energy.

After the renovation, heat in the house is distributed conveniently via the ventilation system. This prevented extensive installation work required by a radiator network or water-based underfloor heating. A mechanical supply and extract air ventilation system was needed for energy efficiency, but also to improve the indoor air quality. Therefore, the Enervent Pandion MD-CHG ventilation unit takes care of ventilation and recovers heat from the extract air, and it also cools the indoor air in summer. When the supply air is cooled down, the excess heat energy removed from the outdoor air is transferred into the energy well.

Ground-source energy and the heat energy provided by the solar collectors are used for heating both domestic hot water and supply air. The outdoor air ducts of the ventilation system contain dedicated water-based heating coils for the first and second floor. The flow in the water coils is controlled with motorized valves according to the heating requirement, using the room temperature control method. The working fluid of the heat pump circulates in the CHG coil installed in the outdoor air duct of the Enervent Pandion MD-CHG ventilation unit. The coil works as an outdoor air pre-heater in winter and a pre-cooler in summer.

The project can already be deemed successful by calculations but only time will tell how energy efficient and comfortable the Salopeltos’ renovated home is in practice. In any case, it is now anything but drafty and leaky. Based on measurements from February 2014, the difference between the new and old values is significant, although there still are some leaks. The leaks are found in the basement and floor structure, which was excluded from the scope of the renovation, and also partly at the joint between the porch roof and the old wall, which could not be fully accessed for sealing without damaging the structures.

Before the renovation, the air leakage rate (n50) was about 9 1/h and now it is 3.1 1/h. The official requirement for new buildings is 4.0 1/h. The improvement in air permeability was 65%. According to Section D5, a single-family house has a good level of air permeability if the air leakage rate is below 3 1/h, and the average level is achieved with the rates from 3 to 5 1/h. The improvement was very good for an old house, even though the passive house level was not achieved.

Next to the old main distribution board of the house, a new board version has been erected that enables detailed monitoring of the consumption and production of heat energy, for example. Four monitoring devices were installed in the mechanical room to measure the consumption of domestic hot water and the energy production of the ground-source heat pump and solar collectors for VTT Technical Research Centre of Finland. All devices are connected in series and can be read remotely via the 3G network.

Ensto Enervent remotely monitors both the ventilation performance and carbon dioxide levels in the bedroom and living room. During the period from March to summer, the indoor temperature has remained near the set value. On a few hot days in the spring, the room temperature did not exceed +25 °C, and the CHG coil cooled the supply air up to 12 °C.

The renZero development project is coordinated by Paroc and funded by Tekes, and in addition to Ensto Enervent, partners include Arkkitehtuuritoimisto Kimmo Lylykangas, Metsäwood, Oilon, Puuinfo, Skaala, and VTT. The other pilot project house was also built in the 1940s and it is located in Sweden, near the center of Stockholm.

The final report of the project will be published at the end of 2014.